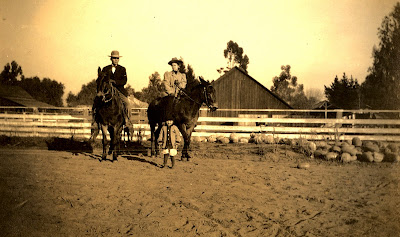 Guy and Marjorie (Davis) Weddington and their daughter Louise (later to be McCreary) in Lankershim (North Hollywood), California - photo given to The Museum of the San Fernando Valley by David High - July 2009. (click on image to enlarge)

Recently, while we were working to identify this and other photographs in the David High Collection, Richard Bogy joked with me about not noticing the pumpkins and watermelons next to the fence. Details, such as Richard's observation, help to identify the time of year and sometimes the location of events. North Hollywood (nee Toluca/Lankershim) was once famous for its pumpkins, shipped by train across America. We are not sure if the Bonner Canning Company processed pumpkins, but one thing is for sure, it wouldn't be Fall in the United States without pumpkin pie.

Do you have photographs or memorabilia of San Fernando Valley agriculture. Become part of Valley history today. Contact your Museum at 1 (818) 347-9665
Posted by Gerald R. Fecht at 9:25 AM