50th anniversary of Kent State shootings -where were you?

If you are old enough to remember that day, time and experience... please tell us about it.

Were you a college student at the time?

A parent with school-age children?

Were you in or did you have family in Vietnam at the time?


Help us educate valley residents and guests about this moment in history.


Enjoy an excerpt from an article in the OC Register via Daily News:


Kent State’s perpetual wound still painful after 50 years
Half a century after four students were killed on campus by military troops during an anti-war protest, some questions may never be answered


Dean R. Kahler’s first college semester was nearing an end when he went home for the weekend 50 years ago this month to celebrate his 20th birthday. 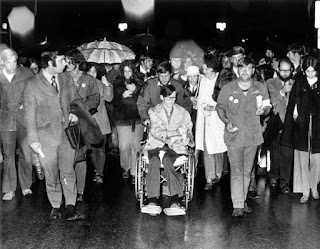 Kent State University student Dean Kahler, who was paralyzed from the waist down by a National Guardsman’s bullet on May 4, l1970, eads a candlelight procession in September of 1970. s. (© Akron Beacon Journal/TNS/ZUMAPRESS.com)

The northeast Ohio country boy had worked in the Republic Steel melt shop in Canton to help pay for school and got a late start on college. He had a high draft number, so he didn’t worry about going to Vietnam. He looked forward to four years of academics to launch his chosen career in public service.

When he returned to campus Sunday afternoon, everything had changed. Two days of anti-war demonstrations culminated in the torching of a campus military building. The governor came to town vowing to restore order and called in the Ohio National Guard. Curfews were set and armed troops patrolled the grounds.

And within 24 hours, on May 4, 1970, Kahler’s world would forever change amid a violent combustion that put a hard time stamp on the end of the1960s and delivered the war to the doorstep of America’s heartland.

That’s when guardsmen opened fire on a crowd of students at Kent State University, killing four and wounding nine, including Kahler, who suffered a spinal-cord injury that permanently paralyzed him from the chest down.

Please click HERE to read the rest of the article.

OHIO: an iconic song written by Neil young in response to the Ohio, Kent state shooting.. listen to this  powerful Time capsule edition and experience the crisp nostalgic sound that would have once been heard ringing throughout Streets in Vietnam protests following the release of four beautiful souls in cold blood by the ONG on Kent state campus grounds in Kent, Ohio May 4, 1970