2010 THE YEAR OF VALLEY ADVENTURES

Today while having lunch at Barone's in Valley Glen, the artist Dale Alexander asked if I remembered a German tank or the Japanese zero that were displayed where Van Nuys Boulevard bends to meet San Fernando Road in Pacoima. Dale said that he recalls the vehicles being used to stimulate sales of World War II bonds. This is a part of Valley history, we need to know more about.

Item by item, artifact by artifact, the story of the San Fernando Valley's role in World War II continues to emerge.

Below, a Master Mason in North Hollywood shows The Museum's historic North Hollywood walking tourists, the great Audie Murphy's application to join the Freemasons. The Masonic Temple has many of Murphy's medals in its library. Audie Murphy was the most decorated soldier in the Second World War, including a Congressional Medal of Honor. 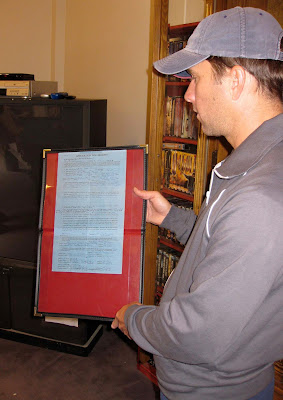 Audie Murphy's application to join the Freemasons in North Hollywood. 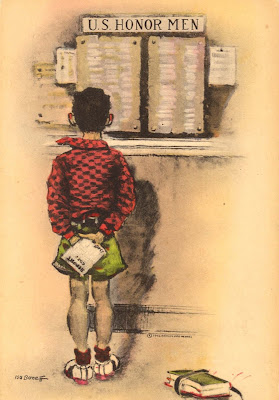 1943 Historic Postcard - Gift to The Museum of the San Fernando Valley from Gary Fredburg 2010.
The onset of World War II was a very frightening time in the United States. Here in a patriotic postcard a school boy looks on the names of heroes from an earlier war. 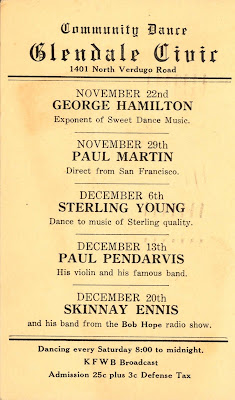 Postcard Announcing a Community Dance in Glendale - Gift to The Museum of the San Fernando Valley from Gary Fredburg 2010. (click on image to enlarge)

Postmarked Nov. 18, 1941, this "penny postcard" reveals an interesting part of American history. Sent 20 days before war was declared on the Japanese empire by the United States Congress, a "Defense Tax" was already in place.
One has to wonder how many people who lived in the San Fernando Valley at the time would recall that they had gone to the Glendale Civic Auditorium to dance to the big band of Paul Martin, Saturday night December 6th.
Posted by Gerald R. Fecht at 8:04 PM