This is an important FREE event that is for adults, families, students and teachers. 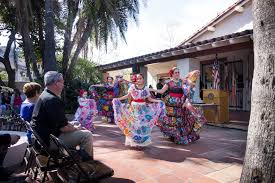 Experience where the Mexican American War ended in California which led to its eventual inclusion as the 30th State of the United States in 1850.

There will be a firing of an actual canon (four times - a record!), Mexican fiesta dancers, military encampment, food and beverages. 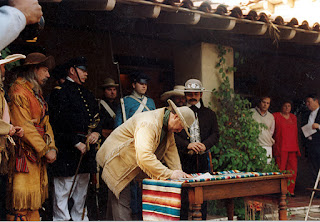 If you can, take the Metro Red Line to the Universal City station. Campo de Cahuenga is only steps away from the station!

Parking in the Universal City Metro Red Line parking lot.  It may be free on Sunday or there is a fee of $3/vehicle -check at kiosk outside of Campo. 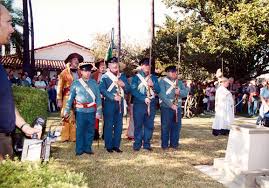 Donations and membership to Campo de Cahuenga are greatly appreciated.

In a serene park of native plants, within the heart of the ever burgeoning entertainment industry of the San Fernando Valley, sits an amazing treasure in California history, Campo de Cahuenga. It is the perfect place to reflect on the storied roots and romantic beginnings of the American West. Once nearly lost to history, the Campo is now recognized and protected by the city of Los Angeles, the State of California and the nation. It is the very birthplace of California as we know it.

The Campo is a place of celebrations. Each January, for more than half a century the events of 1847 are celebrated anew. In a reenactment of the signing of a document by representatives of Mexico and the United States that became known as the Treaty of Cahuenga, signatures of General Andres Pico and Lt. Col. John C. Fremont ended hostilities in the state, creating Peace with Honor. In two years, without first becoming a U.S. territory, California was fast-tracked into the Union. Manifest Destiny was realized. We were one nation from sea to shining sea. All Californians became one people-Americans. To this day, Campo de Cahuenga is a place for celebrating our multi-cultural contributions.

An adobe-like museum building dedicated by Los Angeles in 1951 serves the Campo today. Outside, a display of the latest excavation of the original adobe is on view, one that extends under busy Lankershim Boulevard. All around are the footprints of history. Native Tongva peoples knew this site at the strategic ford of the Los Angeles River. The first Californios walked here. Missionaries, rancheros, gold seekers, pioneers crossed paths here. The Butterfield Stagecoach once stopped at the Campo. A Civil War encampment was erected here. By stepping into Campo de Cahuenga today, on its grounds or through our website, visitors become the newest chapter in the hallowed Campo legacy. 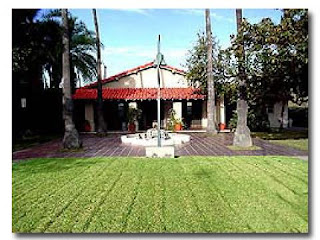